Høytorp meeting
Tue 16th August 2016
The placeThe hardwareThe activitiesGetting dirty
The Rakkestad meeting was interesting, but there was unfortunately not many people present.

Fortunatelly this Høytorp Treffet 2016 was a totally different beast: Nice weather, a large assortment of diverse vehicles, a lot of people, and all in all a very entertaining experience! 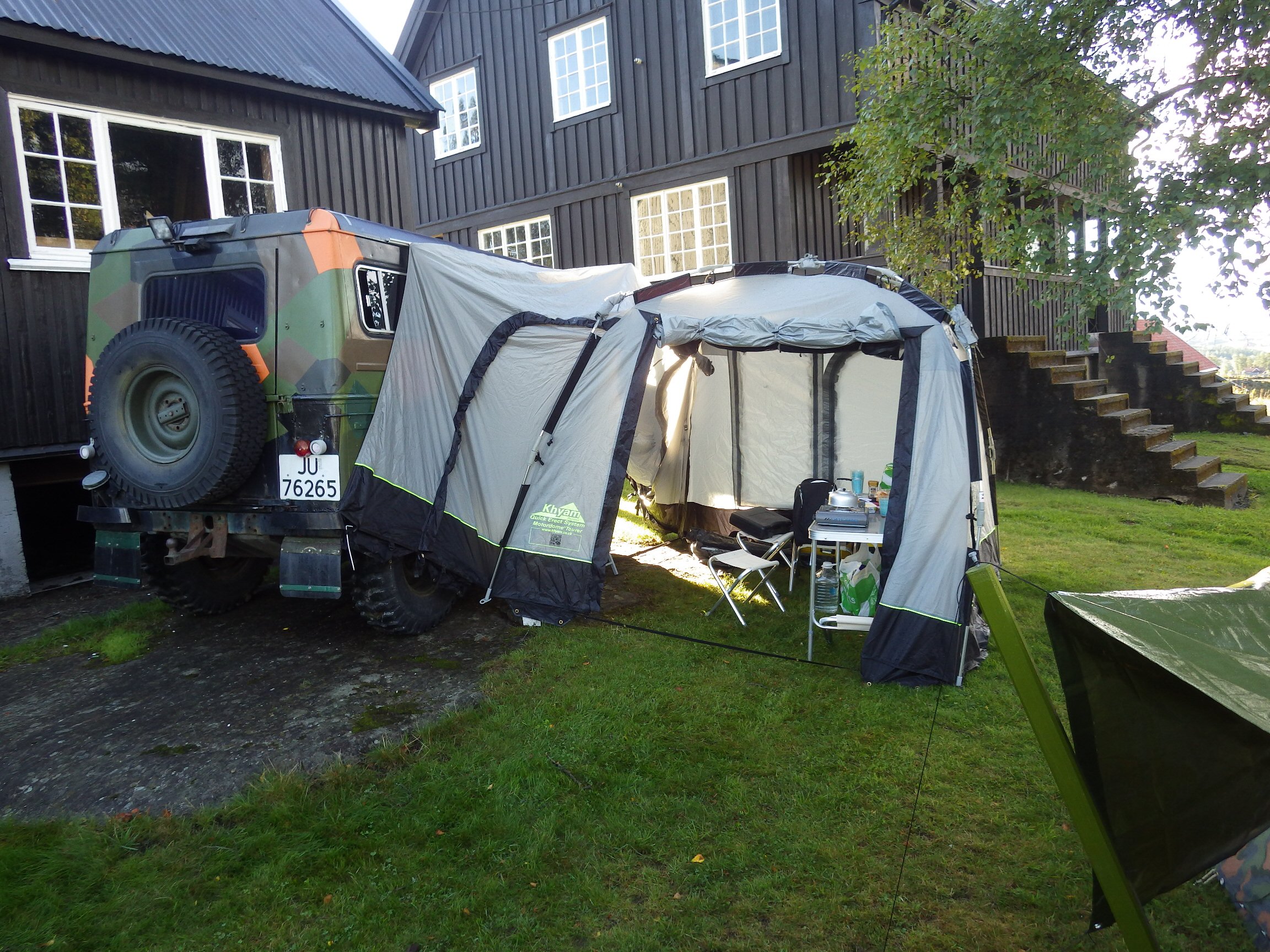 Camping
The meeting took place at the Høytorp Fort, a fortress built in 1915 in the Eidsberg area, about one hour drive from Oslo.

I was hoping to arrive early to the place in order to secure a nice spot in the sun, but unfortunately a combination of bad weather and traffic jams made me arrive later than expected.

Still, I managed to get a nice place... except I did not realize it was in the shadow of two buildings and a tree!

My two closest neighbours were Volvo radio amateurs, each with their own FeltVogn equiped with military radio equipment: One from the 50ies and based on tubes technology, and the second one from the 70ies using transistors.

Radio
The difference in term of occupied space in the vehicle was quite dramatic!

One of the owners also had a "portable" radio.

Technically, it is portable, in the same way an Alienware Gaming Laptop is portable.

The radio had a built-in battery back, allowing you to listen to stations on its own power, but not powerful enough to send messages.

For that, you need two persons: One who provide the necessary power using the hand cranked generator, and the one who actually send the message on the radio! 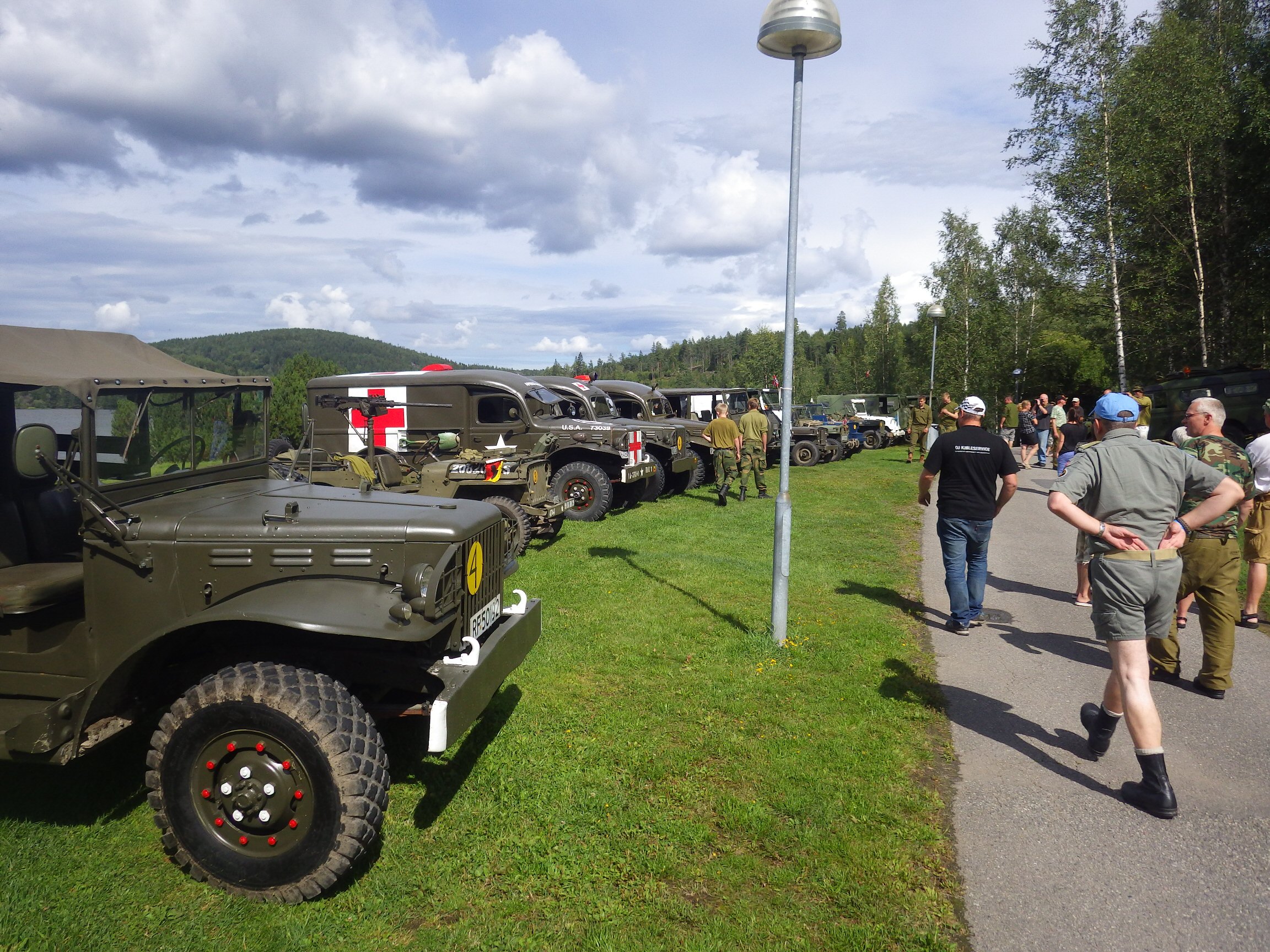 Colonne
I do not have an exact tally, but apparently there was close to 100 vehicles1 at the event from quite many countries: 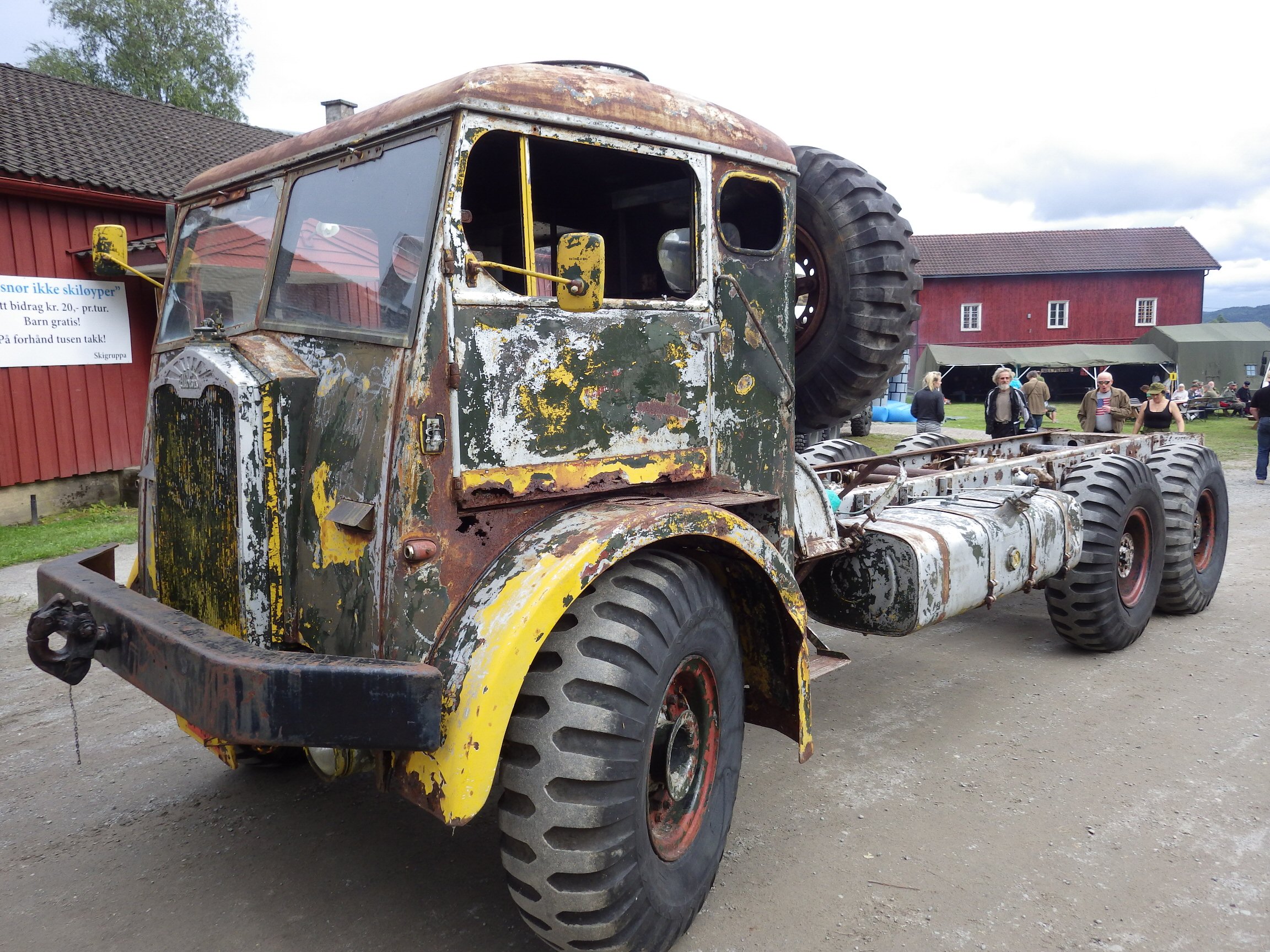 Albion Lorry
plus a bunch of weird things including an Eastern Europe based replica of a German Side Car, a pink Jeep, some child size jeeps and some more recent Land Rovers.

Then of course you have to add the guns, the tents, camo nets, and the various places where people were selling or exchanging old weapons, holsters, daggers and bayonets, helmets and other uniform parts.

It's always surprising to see somebody wearing a United Nations outfit in a friendly discussion with a Norwegian SS officer. 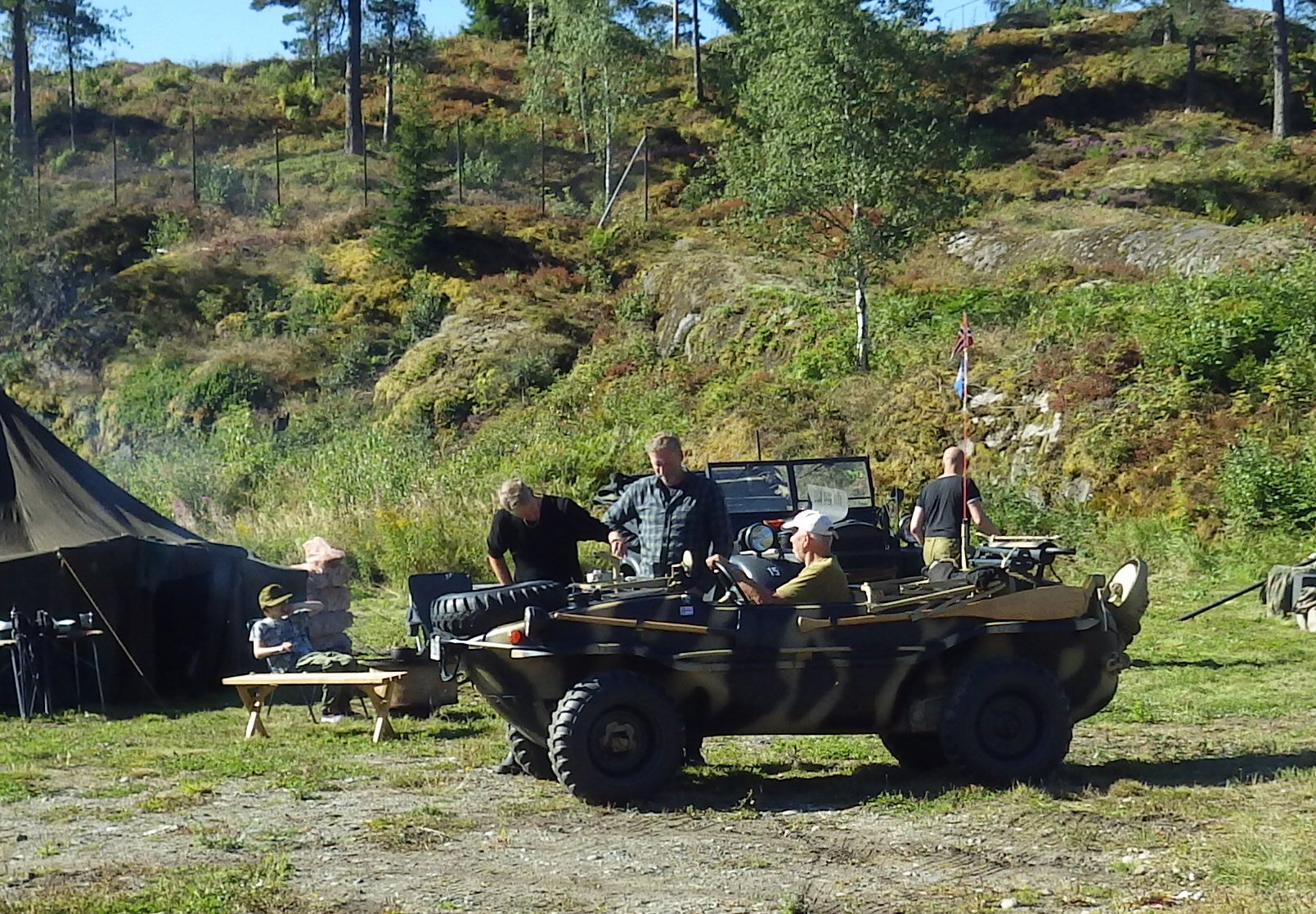 Amphibious Car
There was a bunch of events planned (commented visit of the fort, lottery, rebus-race) but I was busy working on the car for quite a while so all I managed to do was to participate to the convoy driving and then the reenactment of the battle of Narvik.

The high point of the convoy was to see the amphibious car in action: The thing really looks like a bathtub with wheels, and it do floats as expected!

Regarding the battle, well, my history books tell me that it involved German and Norwegian troops, but in this altered reality the Germans fought a bunch of American soldiers who got shot down like practice dummies.

Update: I'm being told that I did miss the actual Narvik battle event, the one I saw had nothing to do with that. Mea Culpa, Mea Maxima Culpa 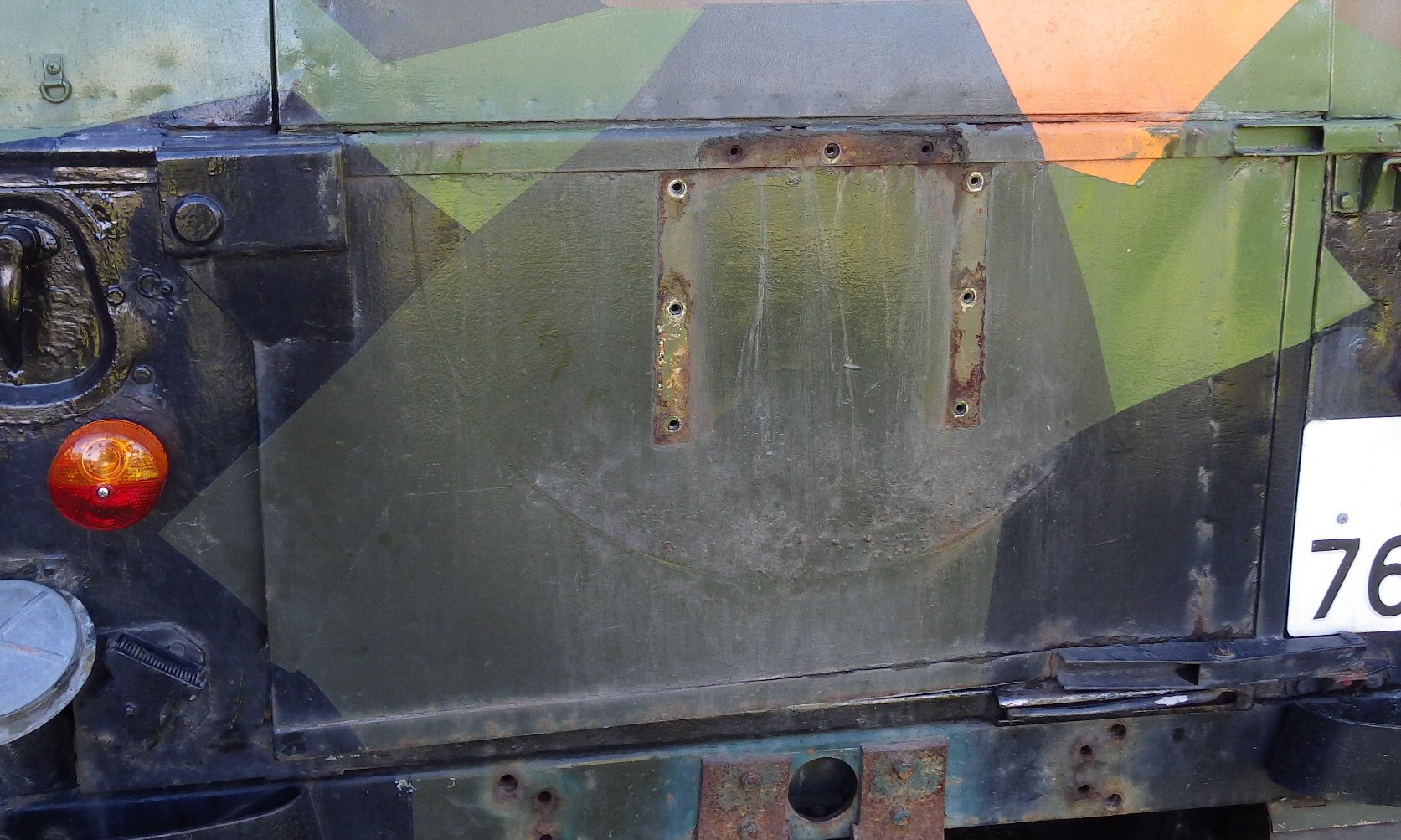 Broken door
I came to the event with a bunch of things I wanted to get sorted:
I had most of the parts with me in the car, and I came prepared with all my tools and necessary consumable. 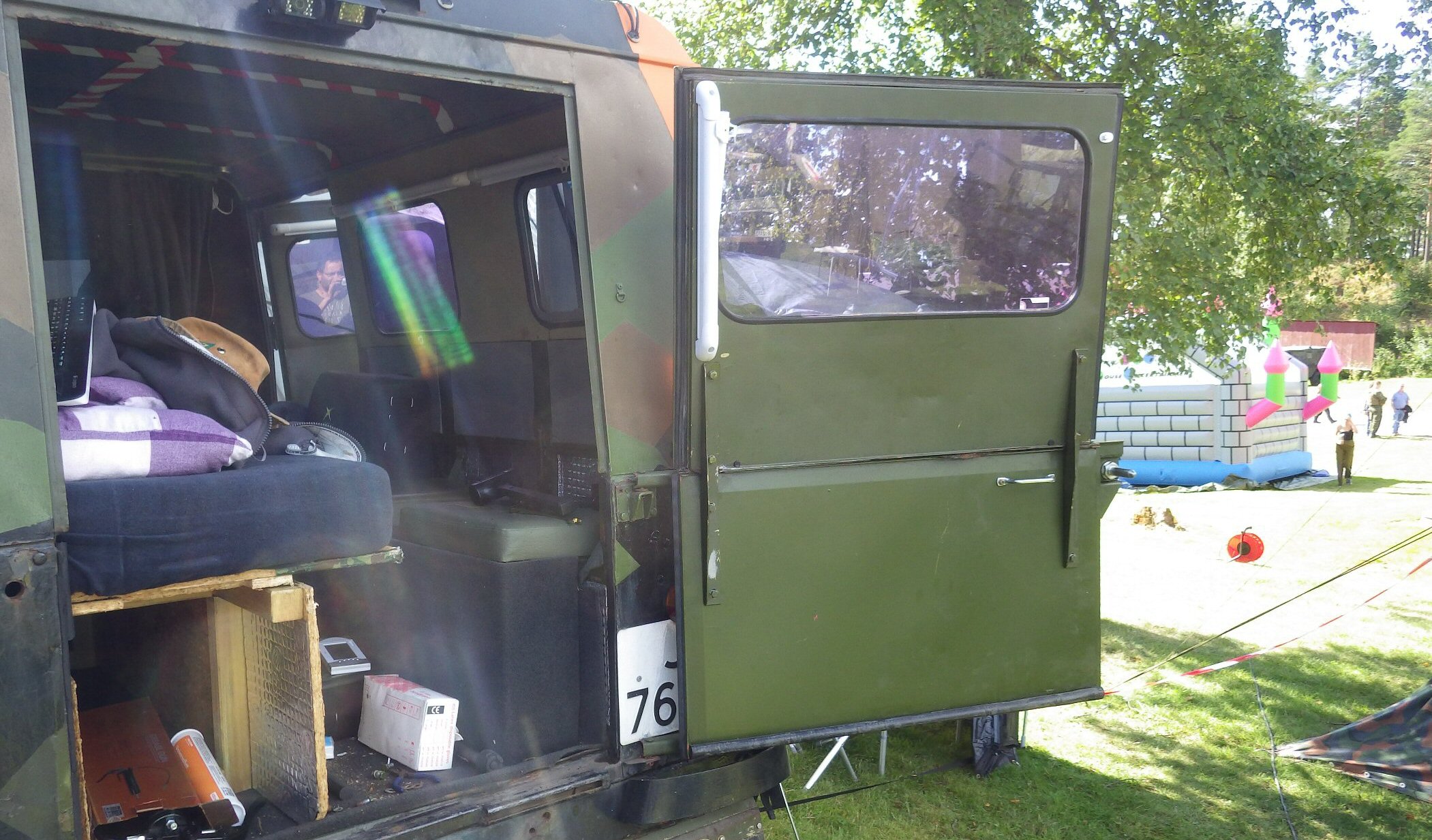 Repaired door
For the door, Olav Teigen's shop had informed us they could bring anything we wanted with free shipping so I ordered the part, which fortunately did fit nicely.

I was able to do most of the work myself, but asked one of my Willys neighbors to help me with keeping the top part of the door stable while unbolting it, I did not have enough hands to make sure I would not drop it.

It does not look so horrible on the photo, but trust me, it would not have stayed like that for a very long time. 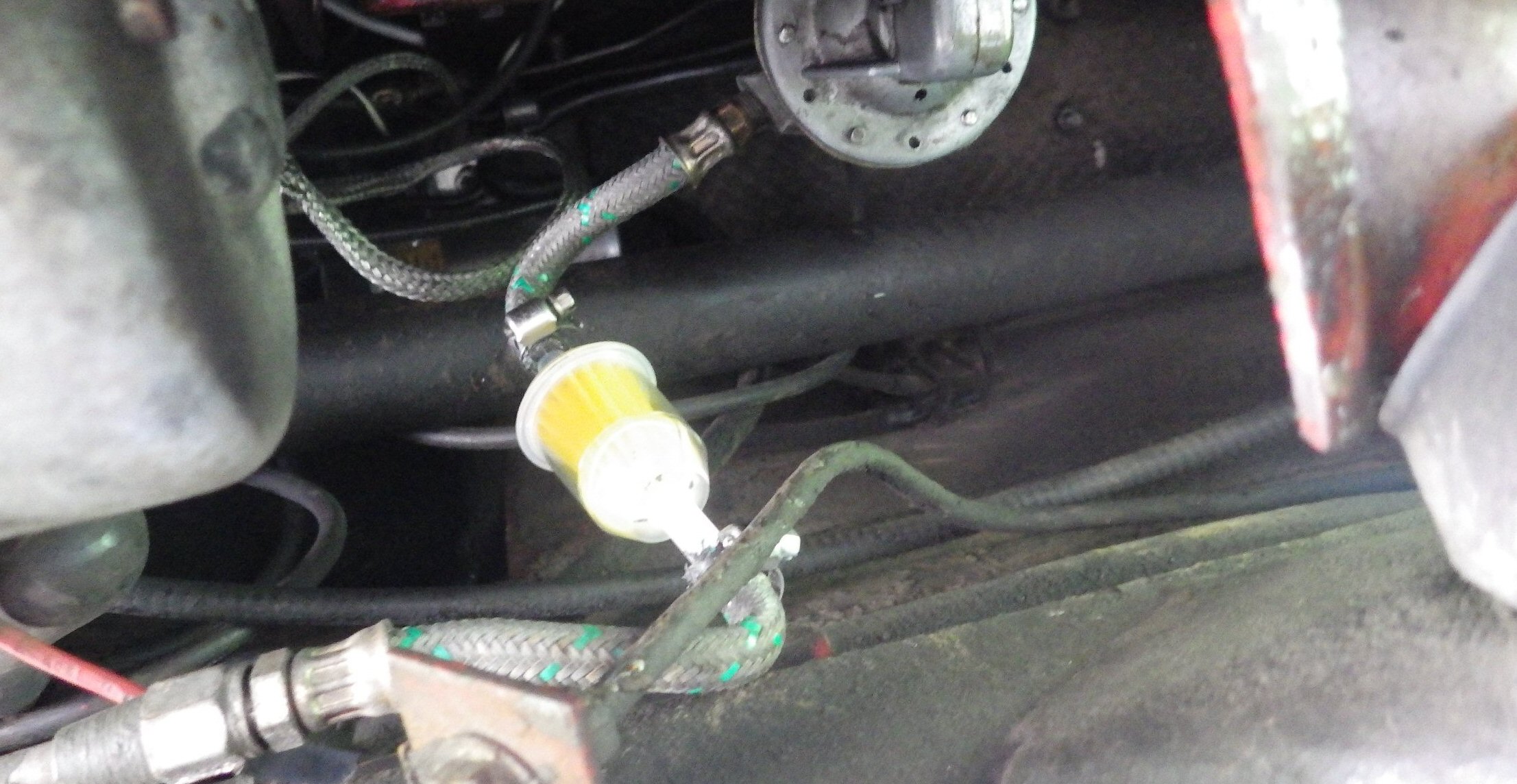 Fuel filter
The weld at the bottom of the panel had failed because of the rust, and the two metal sheets had started to slowly split apart from each other each time we opened or closed the door.

Installing the fuel filter was pretty much a non event: Cut the fuel line before the fuel pump, insert the filter in between, and keep it in place using clamps2

Then I proceeded to the installation of the locking hubs. 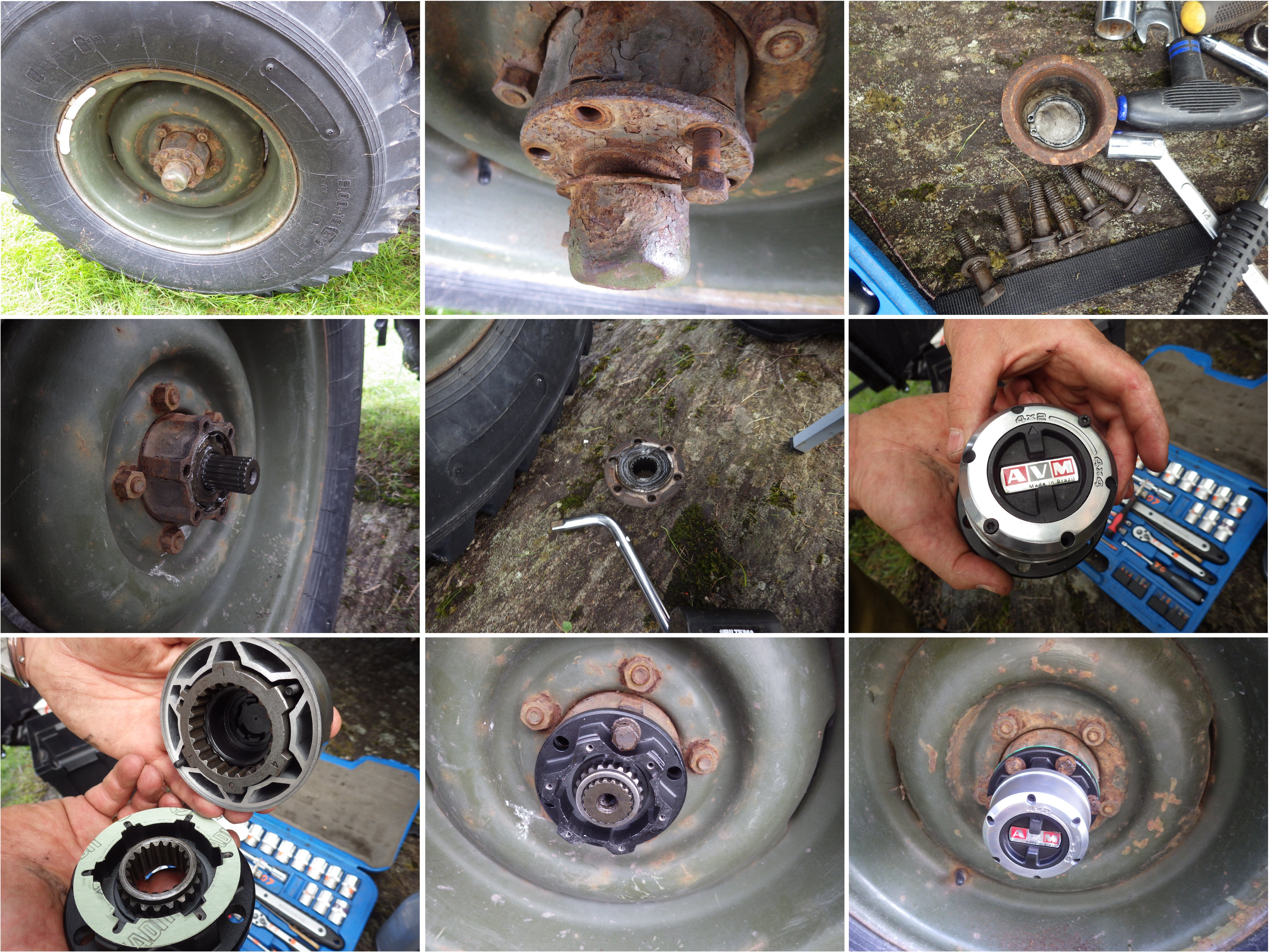 Replacing hubs
The Volvo Feltvogn is not a permanent 4x4 vehicle, it does not even have advanced differentials that can be locked, it's a very simple design, but it works.

One of the issues is that even when in two wheel drive mode the front wheels are still rotating the front drive shaft, which itself rotates the front differential which makes the front axle to turn.

That's a lot of unnecessary mechanical parts moving for no reason, which is why people often replace the front hubs of their cars by locking versions which can be set in 4x4 or 4x2 modes. 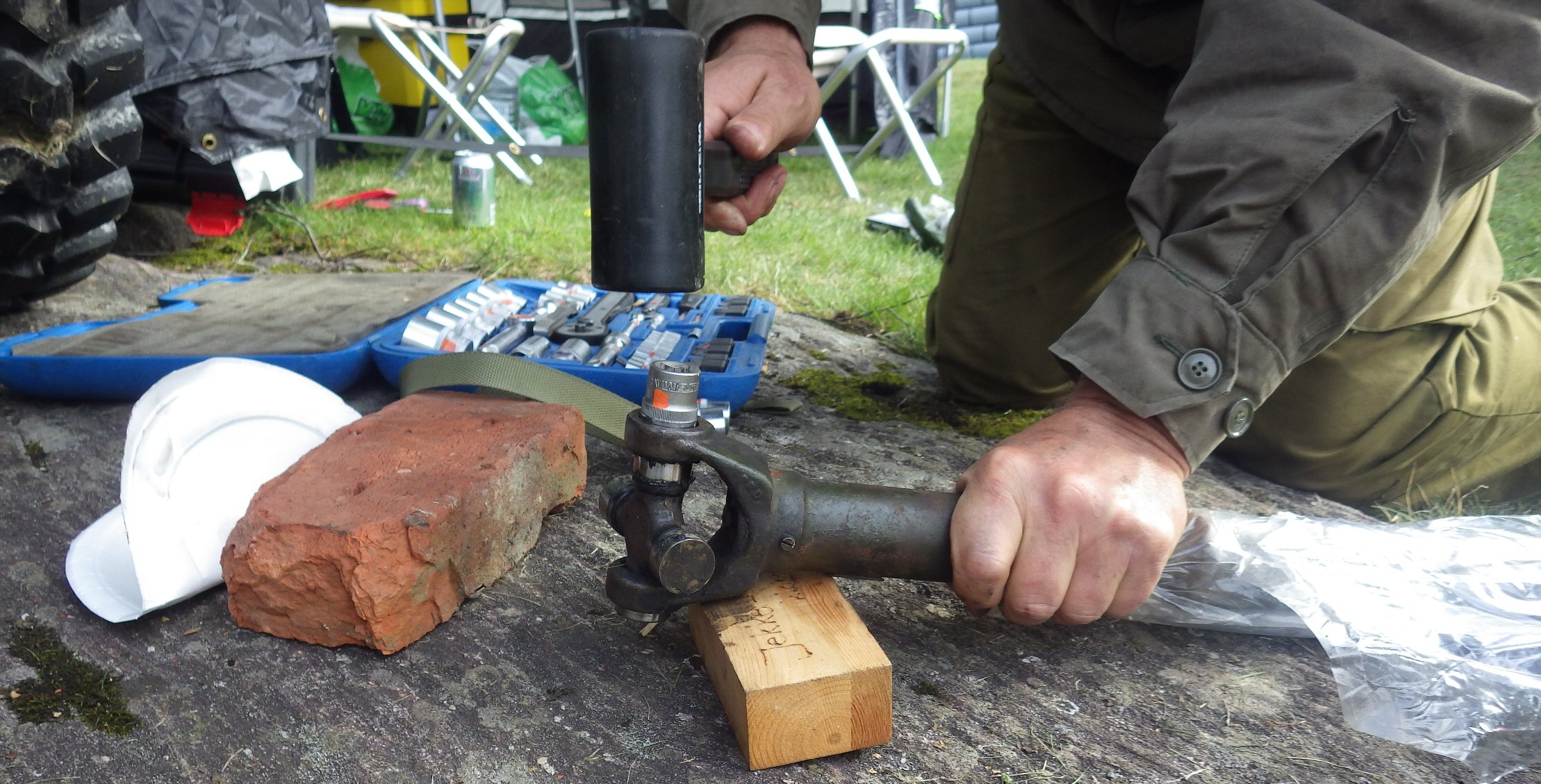 Removing the old universal joints
In 4x2 mode the wheel just turns freely and does not have any contact with the drive shaft at all.

The installation is pretty easy, just follow the instruction and remember to use motor oil to lubricate the gasket, and to never use grease inside the hub3.

The final part was the installation of the front axle. 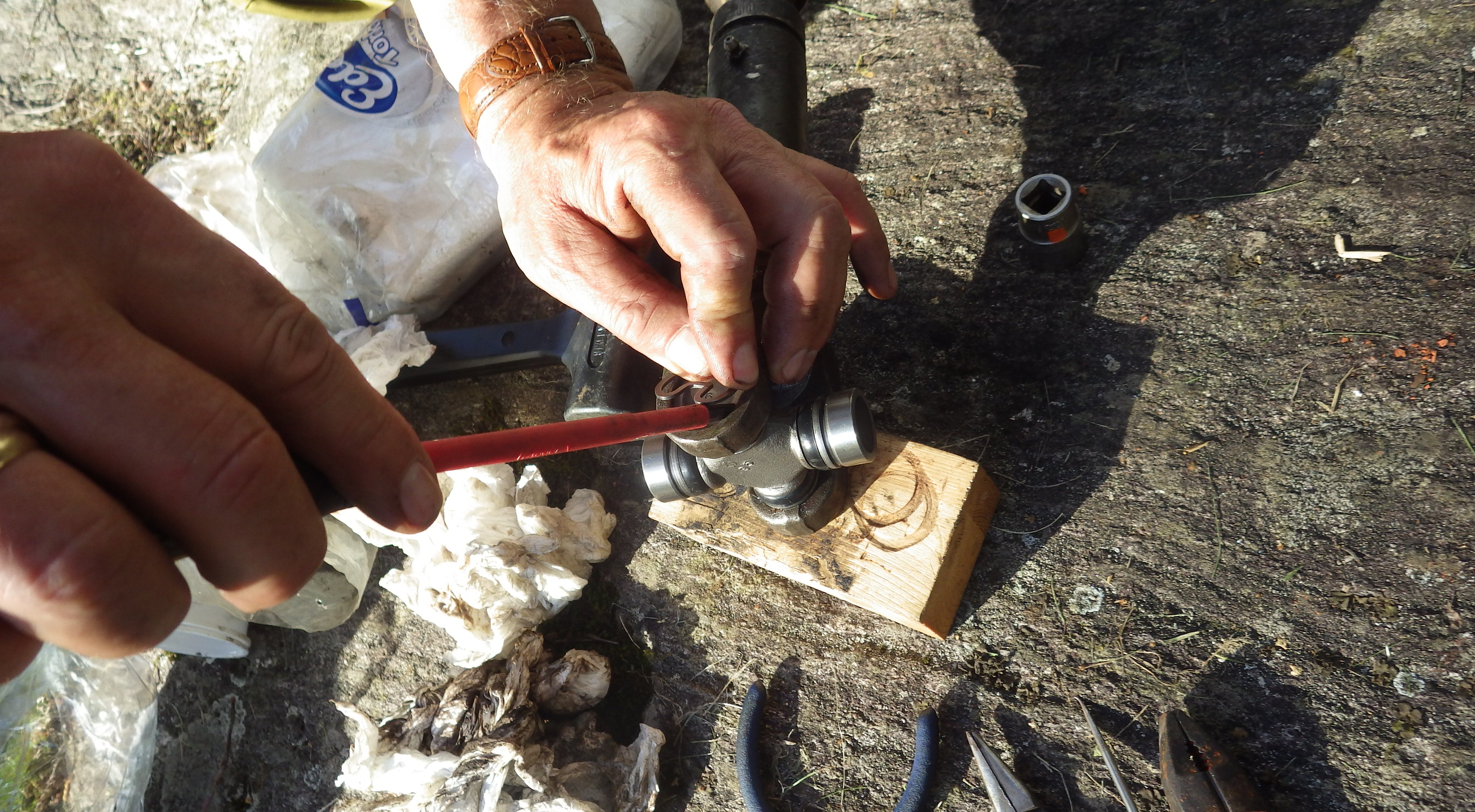 Installing the clamp ring
That one was definitely the most difficult: It required three grown men4, pipes, hammers, pliers, screwdrivers, WD40, a wood block and a large metal axe to finally wack it into submission.

Anyone who tells you that you should always have a spare universal joint around is probably right, if they tell you it's trivial to install while stranded alone on the side of the road they are just being funny - not. 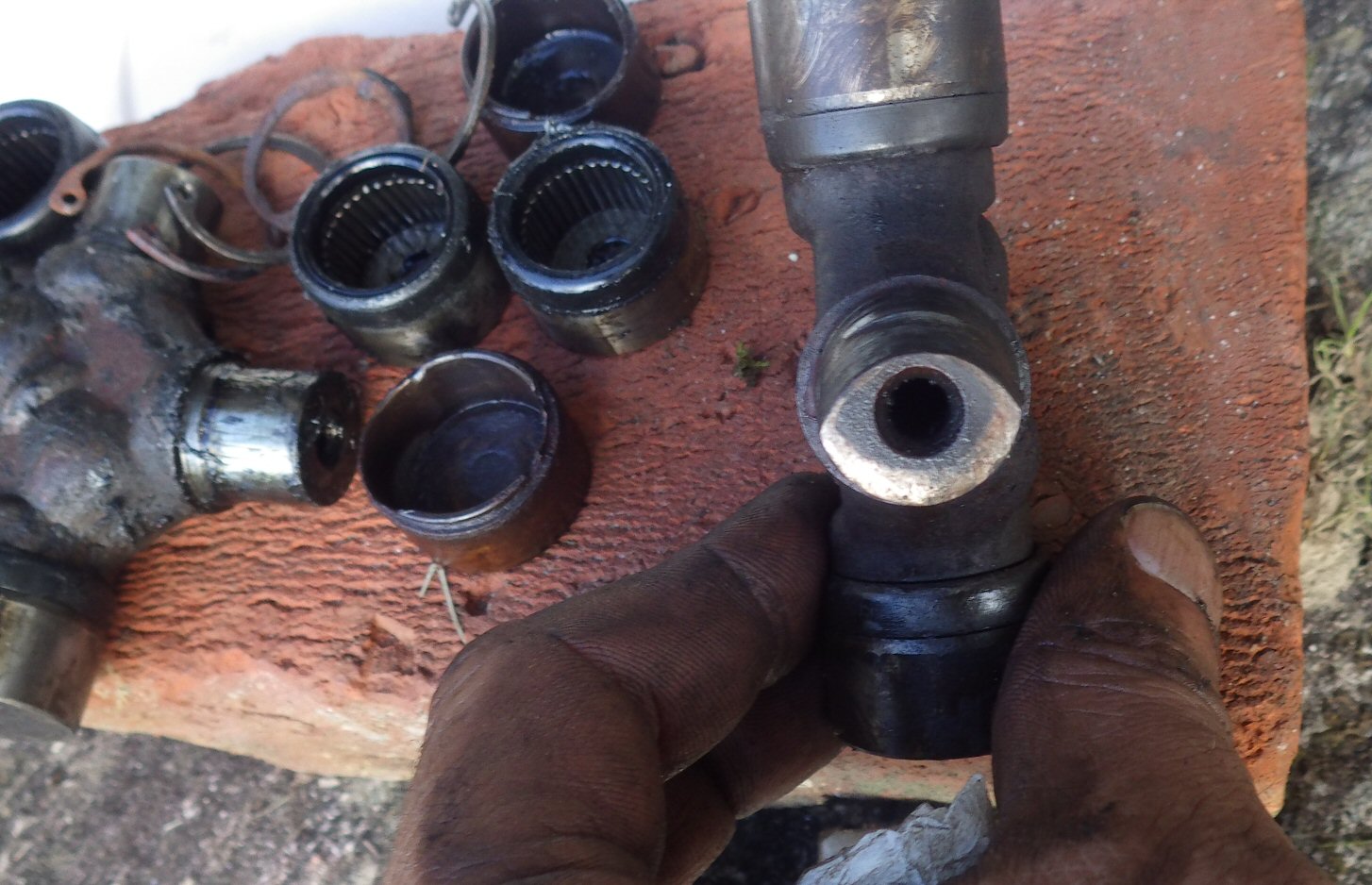 We have a working four wheel drive car again!

And just for the fun, here is picture of the broken universal joint after we managed to remove it.

It had been thoroughly grinded out of shape, hopefully with regular application of grease5 and the locking hubs this problem will not happen anymore.


1. I'm being told there was 109 registered vehicles↩
2. Thanks to Petter for providing the clamps.↩
3. It's also a good idea to keep one of the original hubs in the car in case of a problem because locking hubs have shorter threads and can fail in difficult terrain↩
4. My two friendly radio-valp neighbors and myself↩
5. Respect the smøring schema, else things will fail↩